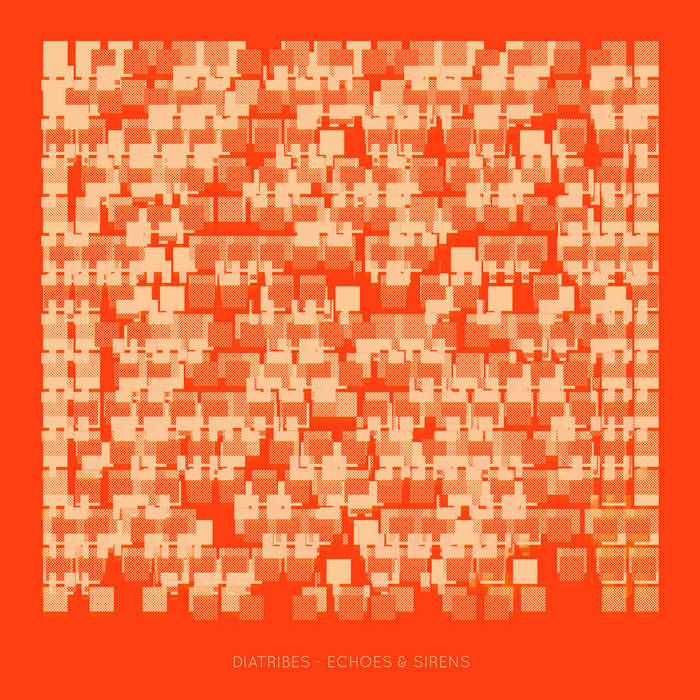 Echoes & Sirens is the Diatribes’ new step in the research on a possible relation between dub and experimental music, pushing further what they initiated with "Great Stone/Blood dunza" (aussenraum, AR-LP-003, 2015). They follow the history of dub music, from King Tubby's minimalist remixing techniques to the second life of this music in England and the rise of a new generation of sound systems - these complete and autonomous entities comprising everything necessary for a reggae party centred around home-made stacks of loudspeakers as loud and powerful as possible.
It's this aspect of the music diffusion in particular that became the focus for the four new compositions on this LP, and specifically the aura of the most famous London based sound
system operator Jah Shaka, who became predominant in the late 70's-early 80's. Under his control the sound system heavily transforms the music, the loudness, the bass saturation, the extreme manipulations (such as long introduction minutes without the bass frequencies,
or the opposite, the reduction of the music to a single bass-line as an earthquake-like climax), the overuse of electronic sirens and delays, transcended by its incomparable animation style as MC.
This album concept follows a path of four tunes, all classics of the early 80's period, considered as four imaginary moments of a sound system night, each one being then processed under different sonic and structural perspectives. The aim was to treat as contemporary,
experimental, electroacoustic, radical and minimalist music a rich amount of materials: types of sounds, timbres and instruments, fragments of melodies, rhythms and gimmicks , and the "image" of this music and culture as well - with found field recordings of Shaka's
parties and interactions with the crowd - the medium of the documents automatically becoming an information in itself, with the distance and poetic created by their lo-fi quality.
Instruments with their usual reggae-like properties, the drums, the electric bass, the horns section, the effects, delays and reverbs, the sirens and the noises present in the field recordings are then assembled in a new form, displaced, turned into independent sound objects with new auditory perspectives while not losing their own roots.
It's definitely not dub music, nor a dub version of experimental music, it's not remixes nor a figurative soundscape. Yet the four tracks have an almost classic structure. Like a tension between silence and the deafening experience of a sound system at full volume, it takes the
risk to conjure many references. Sometimes in contradiction, but always in the quest of experimentation and for the emergence of an intriguing music.

Diatribes, the Geneva based duo, continues his exploration of simplification and rational rituality, and presents a couple a work tighted together by strict sonic or structural principles. Highly detailed textures, repeated gestures, soft tones, febrile pulses and acoustic hyper-sensibility. ... more

Bandcamp Daily  your guide to the world of Bandcamp